Children in Moldova start drinking early in primary grades and when they grow up, most of them get drunk at least once. Cases of alcoholic poisoning are increasing among children, while the authorities do not have a clear mechanism for preventing such cases. The temptation is greater for children when beer, cognac and whiskey are sold a short walk from school.

Alcoholic coma at the age of 7 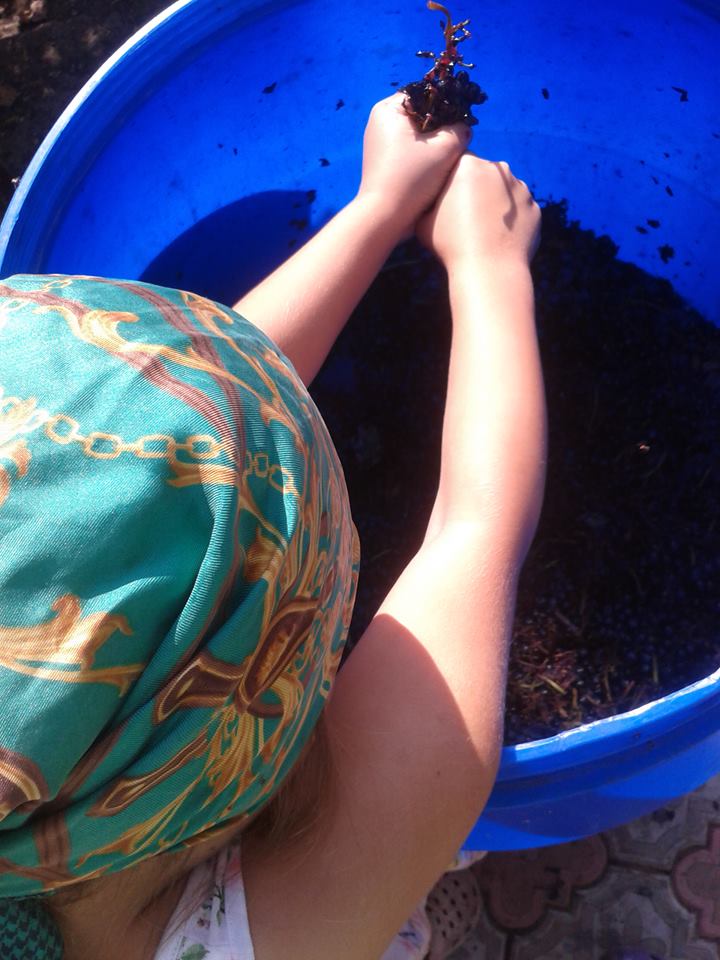 Lenuta, a teenager aged 11 went into alcoholic poisoning when he was in first grade. She drank from the bottle of brandy left by her mother on the table and then she left the house. She could die frozen near a ravine if a villager did not rescue her. Later, the girl told the doctors that she wanted to heat up as her mother did.  Her mother beat her cruelly, each time when she drank alcohol. Villagers gave her food and clothes. Little money coming in the house was all spent on drink. The authorities have started to look for a solution only when the child was on the brink of death, on the hospital bed. Lenuta is now in the house of a professional parental assistant, and the division of social assistance requested the court to deprive the girl’s mother of parental rights.

In Ionel's family, another child who went through alcoholic poisoning, they served alcohol just on holidays.  First poisoning could lead to child’s death- he drank brandy because some friends from the summer camp encouraged him to drink. He went there on summer holidays. The experience cost him several months of hospitalization and severe liver problems.

Bottle of cognac at school

Another teenager was forced to change school after at the age of 14; she was diagnosed with alcohol intoxication. It happened during classes. The girl felt sick and started to vomit. The teachers were frightened and called emergency doctors, who realized immediately that the student had consumed alcohol. Proof - a bottle of brandy found in the girl’s backpack.

Subsequently, she told colleagues that together with other classmates went around the school to drink some alcohol for brighter mood.

Alcohol intoxication at the age of 3

There are cases when children with alcohol intoxication are rushed to the hospital. A 3 year old boy was hospitalized in the capital a few years ago in serious condition after drinking wine. The child, who had been left unattended, found a bottle of alcohol and drank until he fell unconscious. Such cases happened frequently, doctors say.

Victor Scarevnea, chief of the Emergency Division at the Mother and Child Center told us that at least one child was hospitalized with alcohol poisoning every week in this institution. In August, 4 children were hospitalized with such a diagnosis, the smallest was 12. "Children meet, have fun and drink alcohol there. The consequences can be very serious", says the doctor. 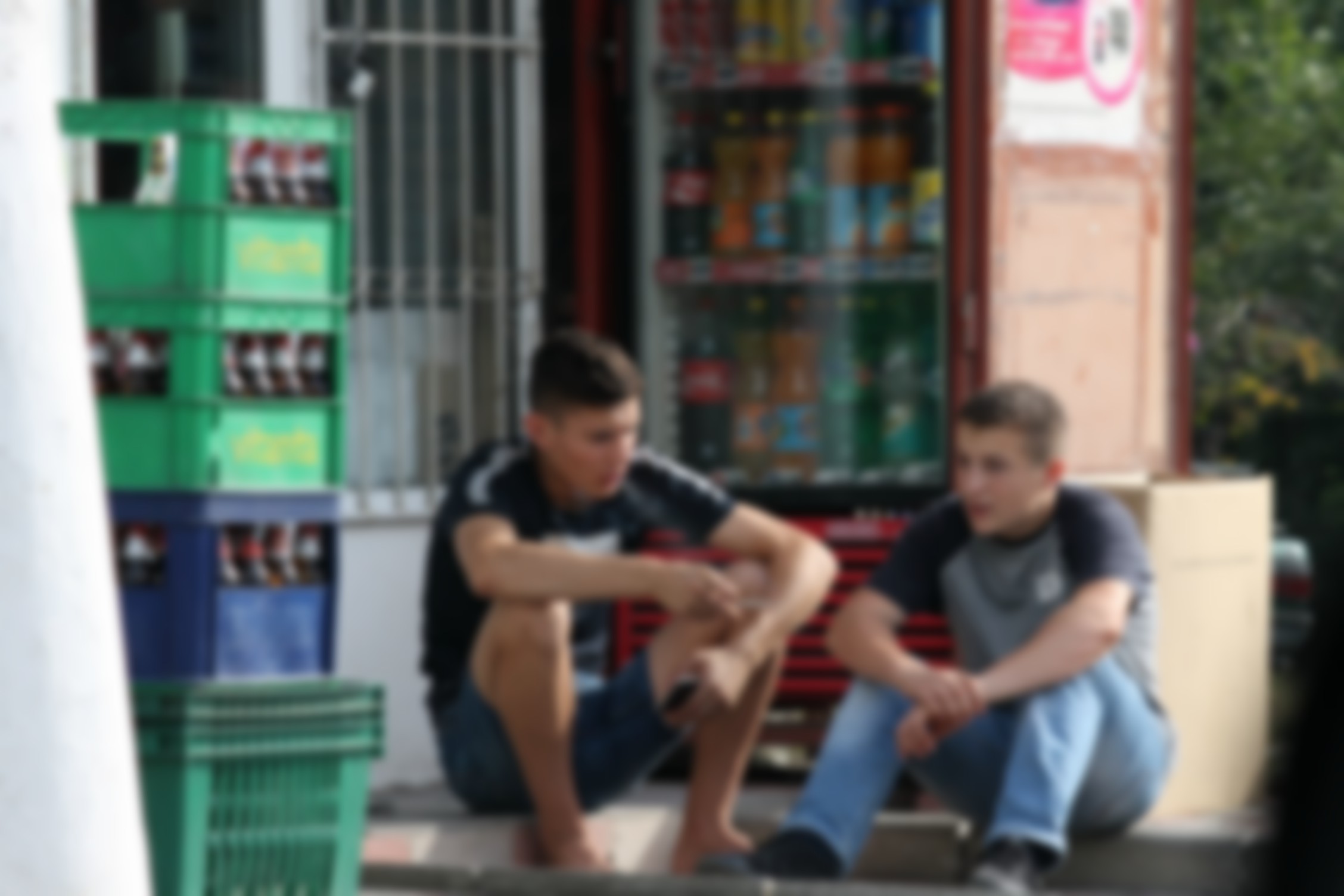 based on risk factors. This initiative belongs to the Center for Public Health (CSP) in the district.

“We supervise risk factors, including by socio-medical polls developed among pupils in schools", says Vladimir Lasenco, head of CSP Cahul. Specialist argues that alcohol consumption and smoking are tough problems among young people: "We found from the answers that some girls come to school with a bottle of wine in the school-bag. A VII grade pupil wrote in the survey: "I come from school, I have 1-2 glasses of wine and I start working".

Vladimir Lasenco argues that the traditions and permissive laws are chargeable: "Example of adults is contagious. When a child sees that adults consume alcohol or smoke in the family, he/she will do the same. On the other hand, the law should be much tougher for shop-assistants who sell alcohol to children. "

„We should teach them traditions, but not to alcoholic poisoning” 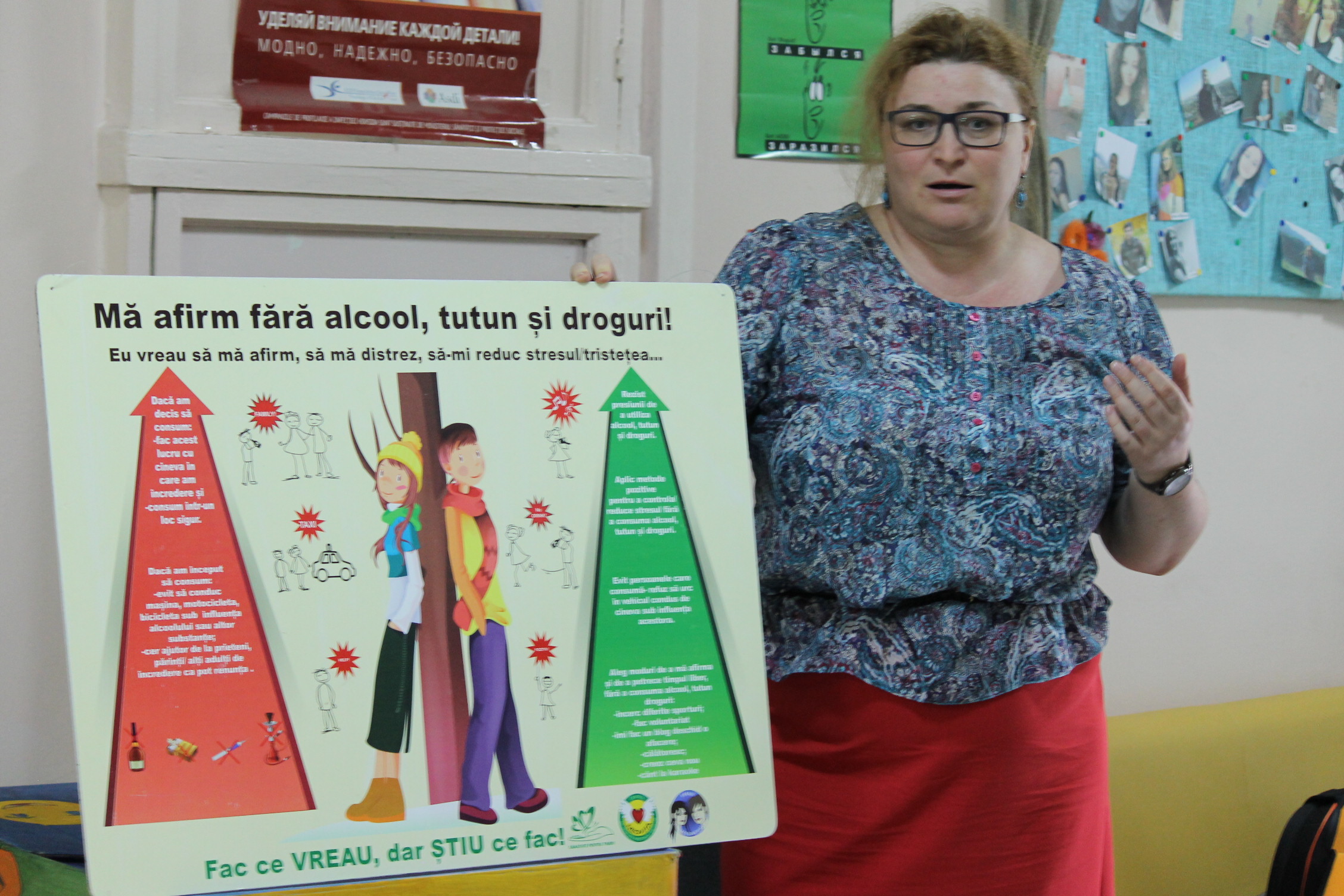 In turn, Galina Lesco, director of the Youth Friendly Center  "Neovita" states that  alcohol has devastating effects over children and adolescents, and  alcoholic poisoning has  serious consequences over the child's body for  the rest of his life: " In  adolescence,  when the body develops, brain and fermentative systems  are not fully developed , alcoholic poisoning leads to highly toxic and devastating consequences for body. "

Specialists say that this is why cases of alcoholic poisoning happen more often among children compared to adults: "Such cases are increasingly being reported by our colleagues in the districts". She claims that entourage children is chargeable: "Let us teach traditions, but not to alcoholic poisoning!  We should promote the lifestyle – It is not possible! But when we say "You cannot", then it does not work ", says the expert.

Another danger, says the expert, is that if the teen is not recovered in time, a teenager who consumes alcohol today will become future alcoholic adult. Meanwhile, consumption of alcohol poses other risks such as unprotected sex, rape, unwanted pregnancies: “cases of violence, girls go to village day in the neighboring village, a get together or a birthday party where teens drink alcohol. Hence, sometimes this leads to unprotected sex, sometimes violent, sometimes forced, sometimes semi-conscious– infections and early pregnancy etc.", says Galina Lesco.

Specialists say that a solution would be to impose much tougher penalties for those who sell alcohol to children. “This is a problem in all districts - alcoholic drinks are sold around the schools and discos", said the director of "Neovita". 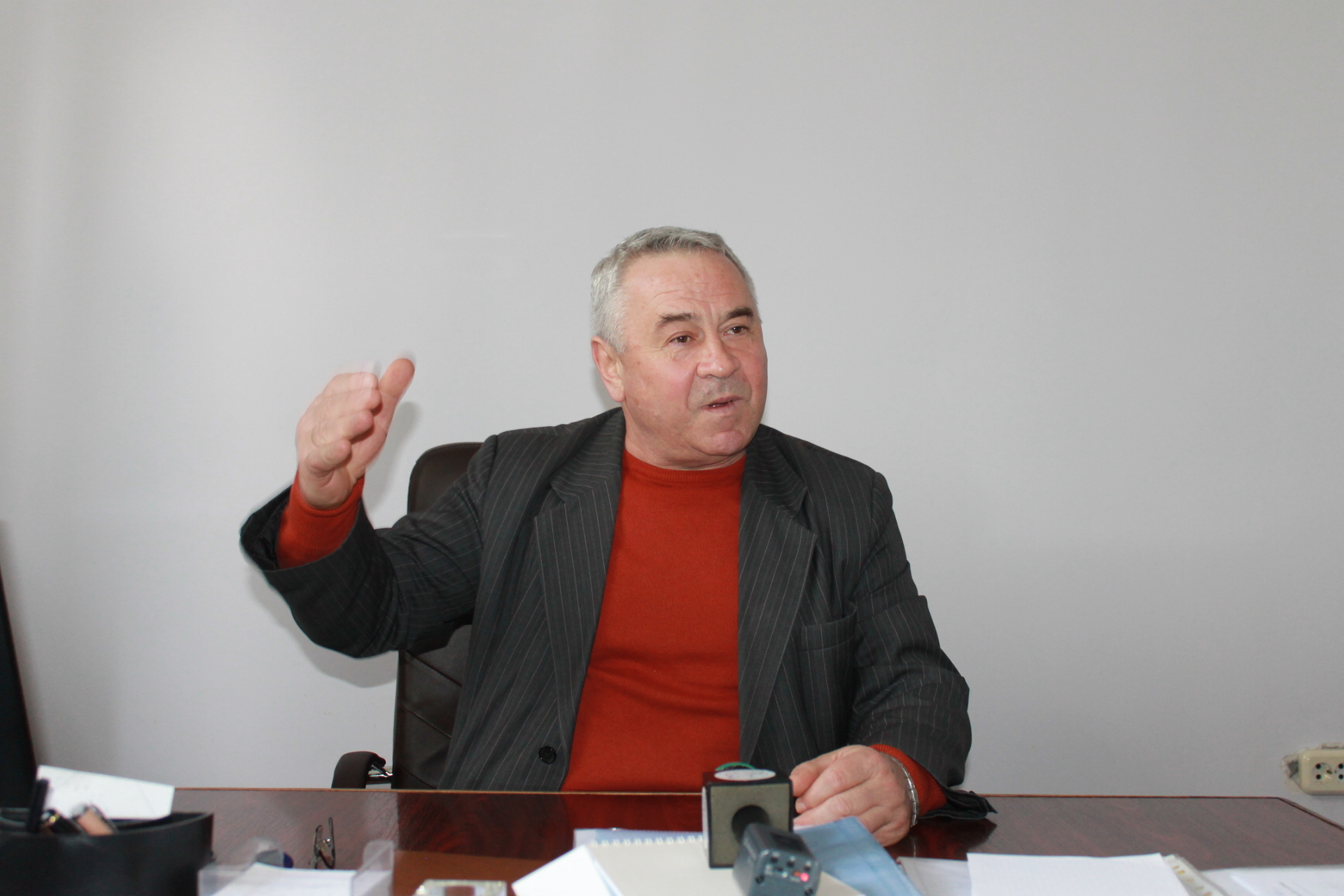 Authorities in districts say they do not have too many solutions for the problem of alcohol consumption among children. Ion Racu, Head of Department for Social Assistance and Family protection Orhei states that many times, the social workers, mayors and teachers do not know how to act when a child has problems with alcohol: "You cannot accuse the man - to say directly that you are an alcoholic. It is a very sensitive issue and there should be well-trained specialists. We try to explain all risks to the children, but it is difficult because you have to be professional".

The official tells us that he did not have too many solutions at hand in case of a teenager aged 14 who lived with his grandfather. The child had his first experience of alcohol poisoning  when he was still in primary school, running away from home, and if someone was trying to convince him to give up drinking, he was threatening that he will commit suicide, says Ion Racu. The teenager was placed in a community center, went to school, after which he returned home. Ion Racu says that local authorities are chargeable as they should take tougher measures against people who sell alcohol to minors: "I tell mayors to take action because they are the guardianship authority, not to allow bars operate close to educational institutions until very late hours, but they say that the decisions are taken by local councils".

At bar, around the school 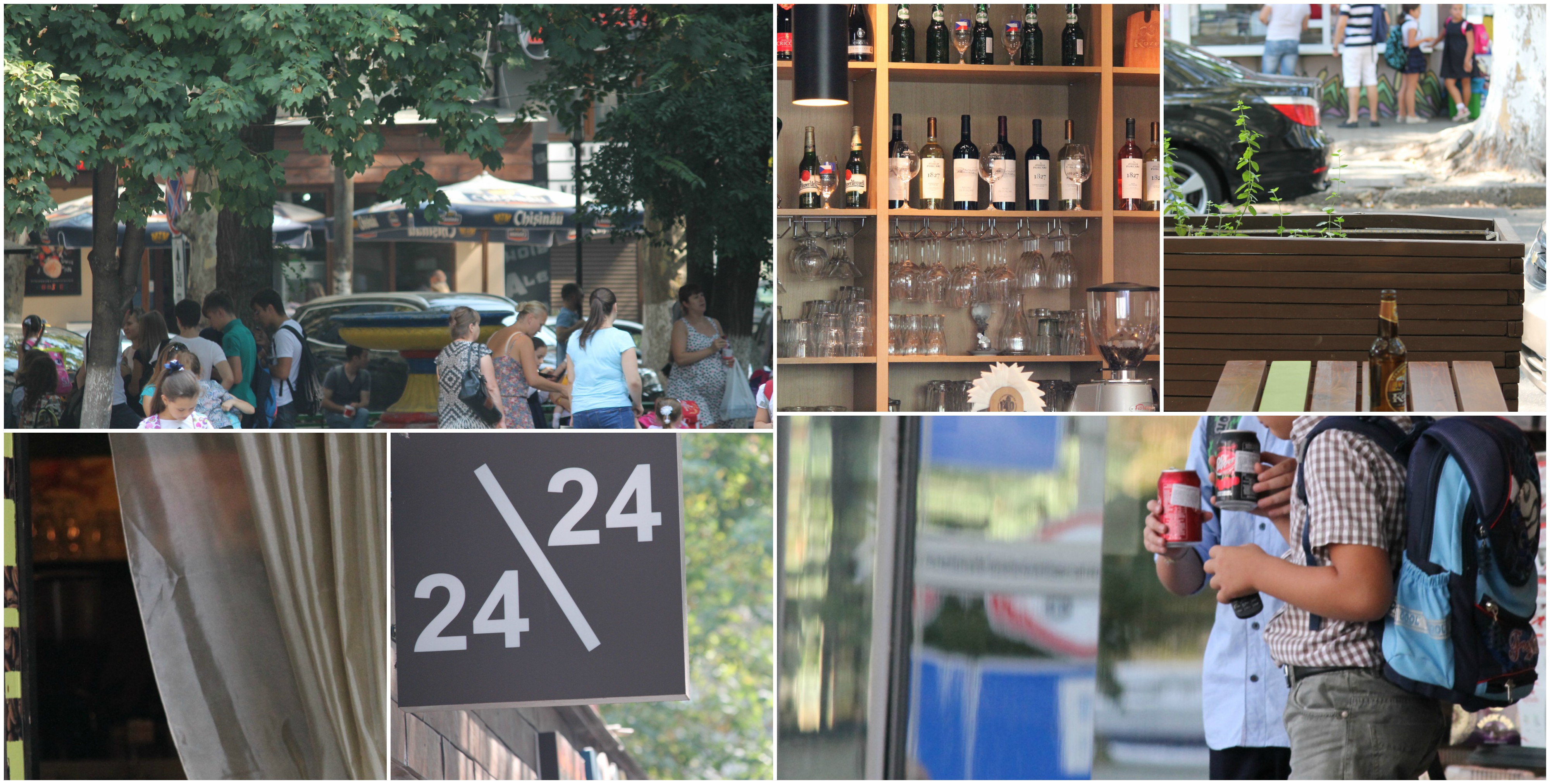 In 2015, the Police employees have completed 89 reports for retail sale of alcoholic beverages to children. Also, the agents have initiated 40 contravention procedures for detecting intoxicated minors.

Even if a regulation of the Interior Ministry prohibits sale of alcoholic beverages in the vicinity of schools, the provision is violated, especially in Chisinau. Several schools in downtown have one or more places where alcoholic beverages are sold. In some cases, the bar is just a short walk to the entrance to educational institutions.

Children are not included in official statistics on alcoholism

Specialists warn and say that more and more children start drinking alcohol at early age, while the statistics of the Republican Narcological Dispensary does not report more than dozens of cases of this kind every year. The director of the center Mihai Oprea, admits that actually the number of children who have problems with alcohol is much higher, but unlike adults, teens are not subject to monitoring by narcologists. The youngest consumer of alcohol registered at the dispensary was aged 10.

"Children and adolescents do not show obvious signs of disease, but the risk of the consumer in 2-3years is more or less systematically, they become addicted to alcohol",  says the specialist.

The only solution of the Narcology Dispensary is that teenagers with problems should be always in the attention of school psychologist: "Every school in the country should have a psychologist. Children who have delinquent behavior should be included in educational and prevention programs in order to diminish consumption and restore a harmless behavior from narcological viewpoint ".

Meanwhile, according to official data, schools lack psychologists. Shortage of staff is tough especially in village schools where most of cases of alcohol consumption among children are registered.

Most of them went drunk at least once in their lifetime 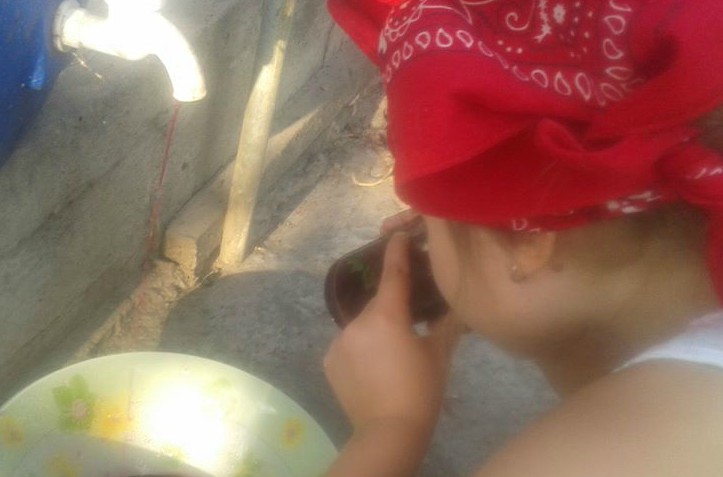 An evaluation study of health behaviors of school-age children in Moldova launched in 2014 shows that every third child aged 11 consumed alcohol at least once in their life. As for children aged 13- every second child had this experience, for children aged 17- the figure reaches 100%. Each tenth respondent aged 11 and each fourth respondent aged 13 went drunk at least once in their lifetime.

They search information about alcohol in internet 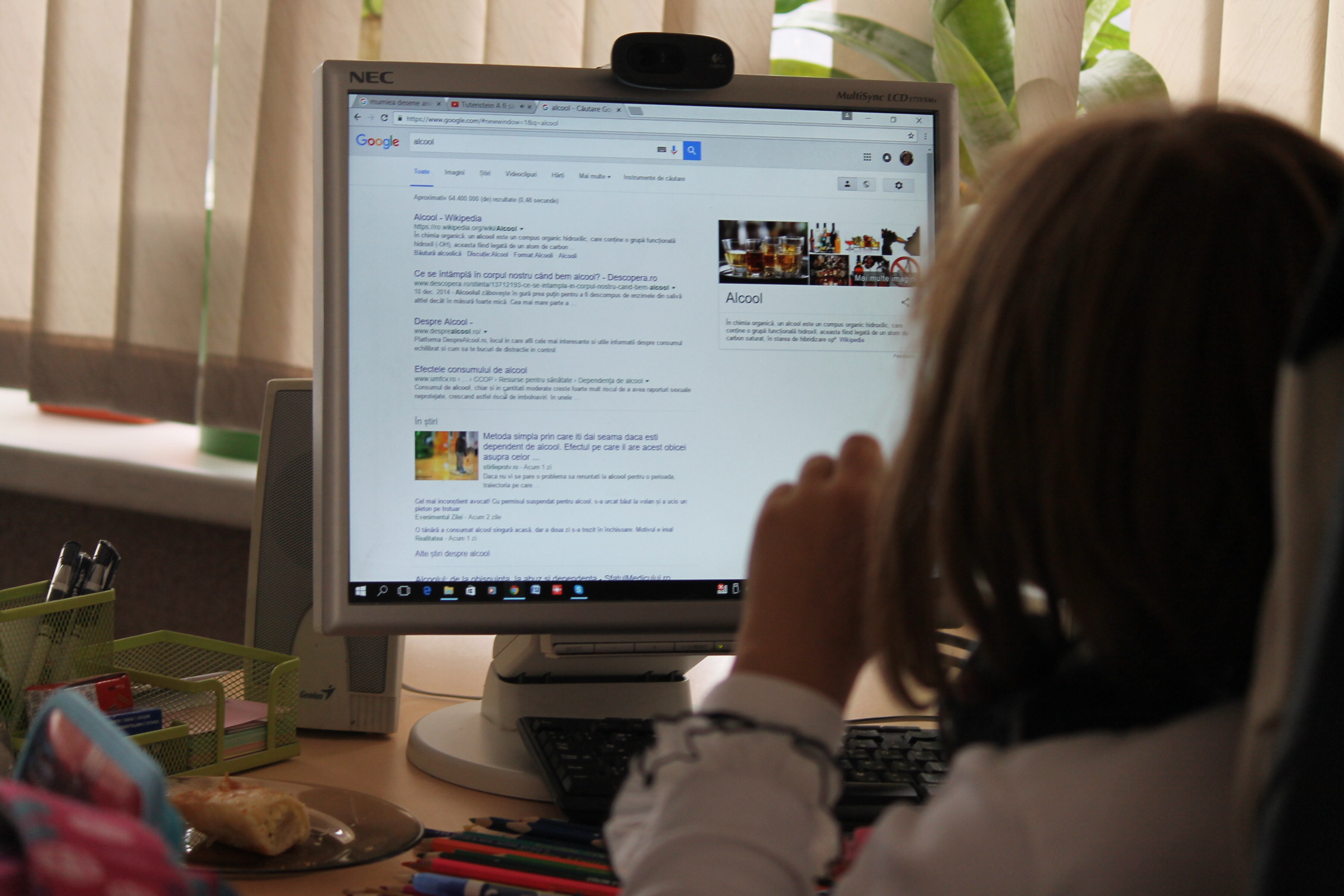 Moldova ranks second in the list of countries that consume the most alcohol among adults, according to a study of the World Health Organization.

According to the Ministry of Health, over 46 thousand patients with chronic alcoholism and 583 patients with alcoholic psychosis were registered earlier this year in narcological institutions in the country.