Children work hard and the state ignores them

The moratorium on controls leaves room for people who violate the law and employ children. For several months, State Labor Inspectorate does not have the right to perform controls and the patrons employ children as they are sure that no one will stand in their way.

Children work to help their parents to pay off debts

A boy aged 15 from town Stefan Voda goes to school in daytime and works at a restaurant during the night. He accepted to work as a waiter in a restaurant in the town. He got used to this regime and he works the whole period of time when he is on holiday. At work, he must set silverware on the table, clear the table, wash the plates and put them away.  He is the last to leave the building as he must wash the floor.  He works hard to pay off the debts of his parents. He took a liking to money and he does not imagine how it would be to exclusively deal with the school. The Labor Code prohibits labor of children under 18 in places where people consume alcohol and smoke.

Other children earn their money in construction, where controls are almost missing. In most cases, children carry construction materials, especially bags with sand or cement, concrete slabs or waste left on site. They work ten hours a day and they are paid two times less than adults. In another case, a teenager from Orhei district went to work in summer in a workshop on manufacturing of monuments.  He started work at 8.00 and went home at 18.00.  He was carrying concrete all day long, poured it into molds, and then he uploaded and downloaded sculptures. In late summer, the employer did not give him all the money, because he did not have a contract. By law, persons under 18 must not carry heavy loads. In 2013, the Government approved the Nomenclature of works with difficult and dangerous working conditions banned for minors, which includes work in producing articles and constructions from reinforced concrete and concrete.

In addition, adolescents under 16 are not allowed to work more than 5 hours per day.

Some children are forced to work at school as well because they are punished by the administration for inappropriate behavior, while their peers attend lessons. In one case, a student was ordered to carry buckets of sand, and given the lack of women on duty in many educational institutions, pupils, including from IV-V grades were forced to wash the floor in classrooms or supervise at the entrance to the school, between 8.00 and 16.00. Moreover, to escape additional charges, some teachers prefer to use pupils for house work in exchange for good grades.

Forced to work because of poverty 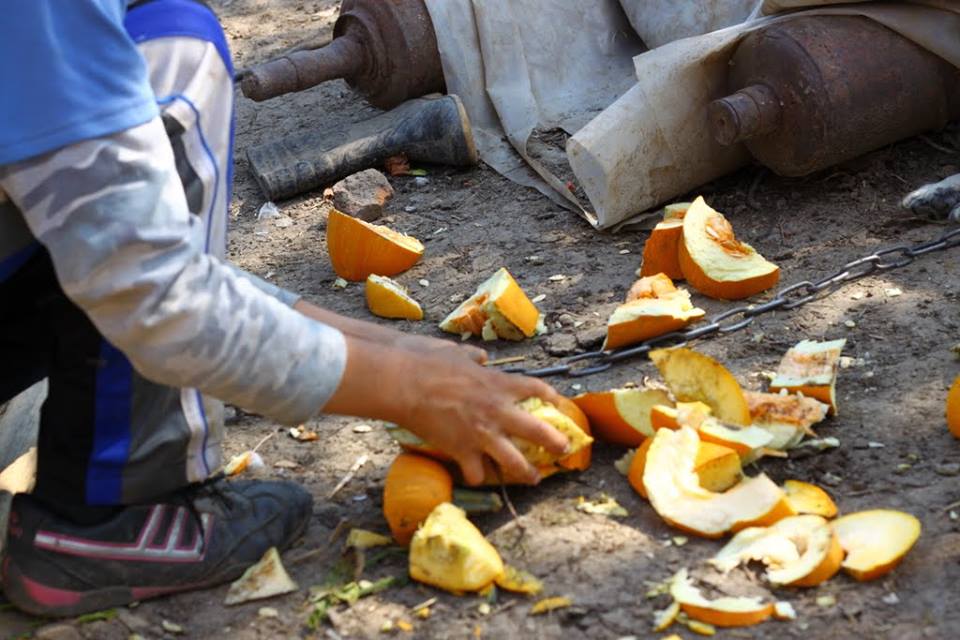 All these cases have been detected by children who are part of a think tank set by the Child Rights Information and Documentation Center (CRIDOC). This group draws up a report based on case studies for the Committee on the Rights of the Child. The group's activity began in July 2014 and the study covers five categories of rights, including protection against labor exploitation.

"One of the findings is that the lack of children’s awareness about their rights at work place and the difficult situation of the family determine these children to be employed illegally that is a real threat to their life. This is because they work overtime; they do not have a stable work schedule and hence is the dropout. Children work twice more than the law requires: in construction - ten hours a day, in servicing- 12 hours. Some children work at night, which is prohibited by law", says Maria Iaconi, member of the think tank.

In turn, Cezar Gavriliuc, executive director of CRIDOC argues that the authorities should consider the child's interests a top priority. "If the family is poor and a child is forced to support his family, the authorities do not consider that this is a problem and they blame the family - parents are disorganized, drink alcohol, have low incomes, but we do not wonder who established these conditions. Also, it is the state that has assumed some commitments under the UN Convention on Children’s Rights and must provide a family environment for every child", said Cezar Gavriliuc.

They work more but are paid less than adults 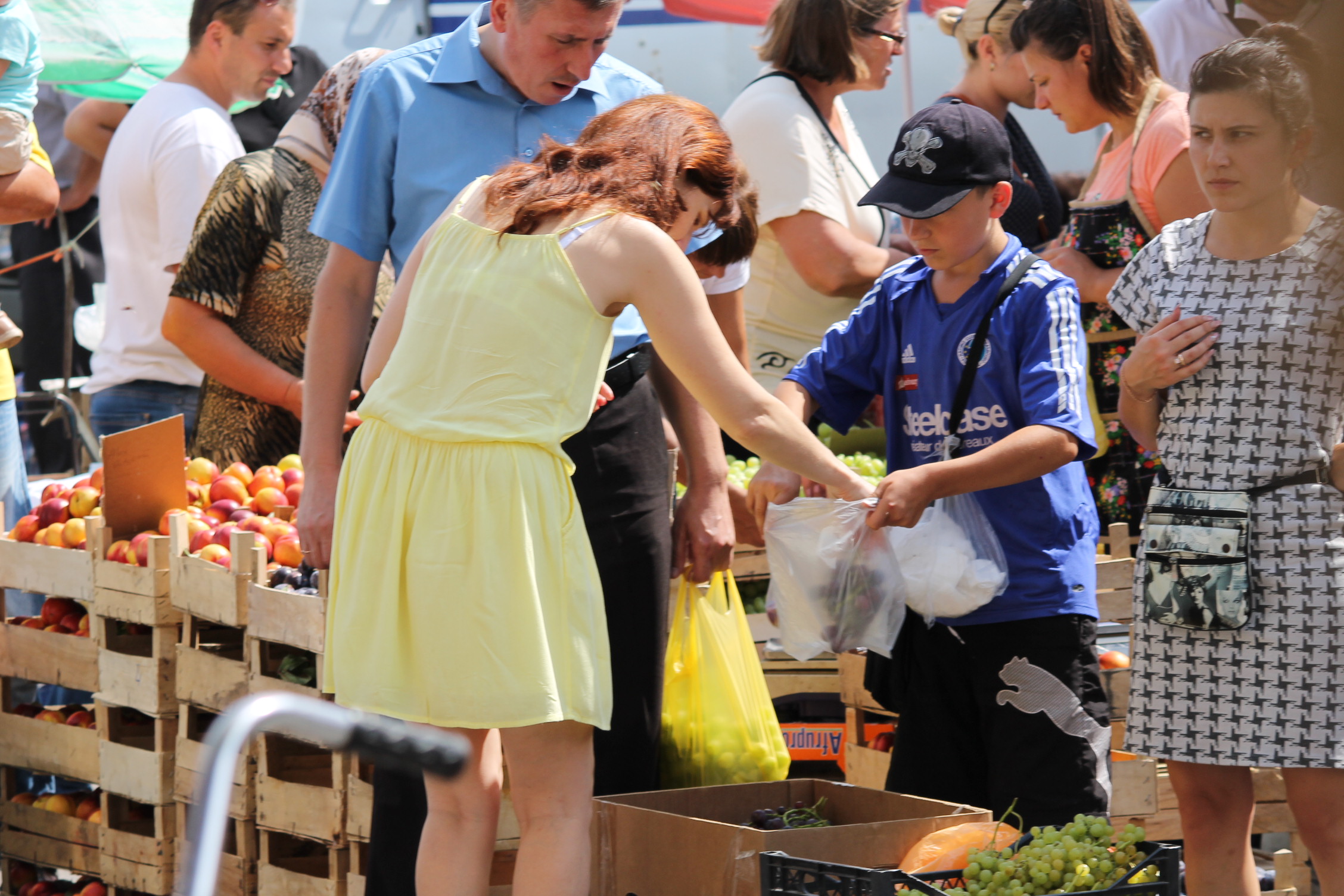 While civil society warns that many children are subject to exploitation of labor, State Labor Inspectorate (SLI) does not have effective levers to combat this phenomenon.

After a moratorium on controls was set on April 1, 2016, the Labor Inspectorate could not check if patrons employ children. Head of Department at SLI, Victor Turcan said that the activity of labor inspectors was turned upside down by the Law on state control over business activity, which in the past two years, did not allow them to perform a rigorous control. "Controls are allowed, but you should inform the employer 5 days before an inspector comes.  You realize the result of this control, when the employer knows that the company will be visited by a labor inspector!  Either the enterprise is closed when the inspector comes, or 2-3 persons are employed legally in this institution. Before the law was enforced, the Inspectorate registered 300-400 cases of child exploitation", said Turcan.

A publication of the National Confederation of Employers of Moldova, developed last year by the International Labor Organization, shows that about 70 percent of the economy and informal employment is concentrated in two sectors: agriculture and construction. People aged between 15 and 24 are overrepresented among informal workers, who are mostly from rural area.

Many children go blackberrying in district Dubasari. They wake up every day at 4am and go in the center of the village where a cart carrying "employees” take them to the plantation placed at a distance of few kilometers. Thy work illegally until 14.00 and the trader pays an average of 70 lei each per day, depending on the amount they manage to collect.

Many children work hard in the agricultural markets from the capital 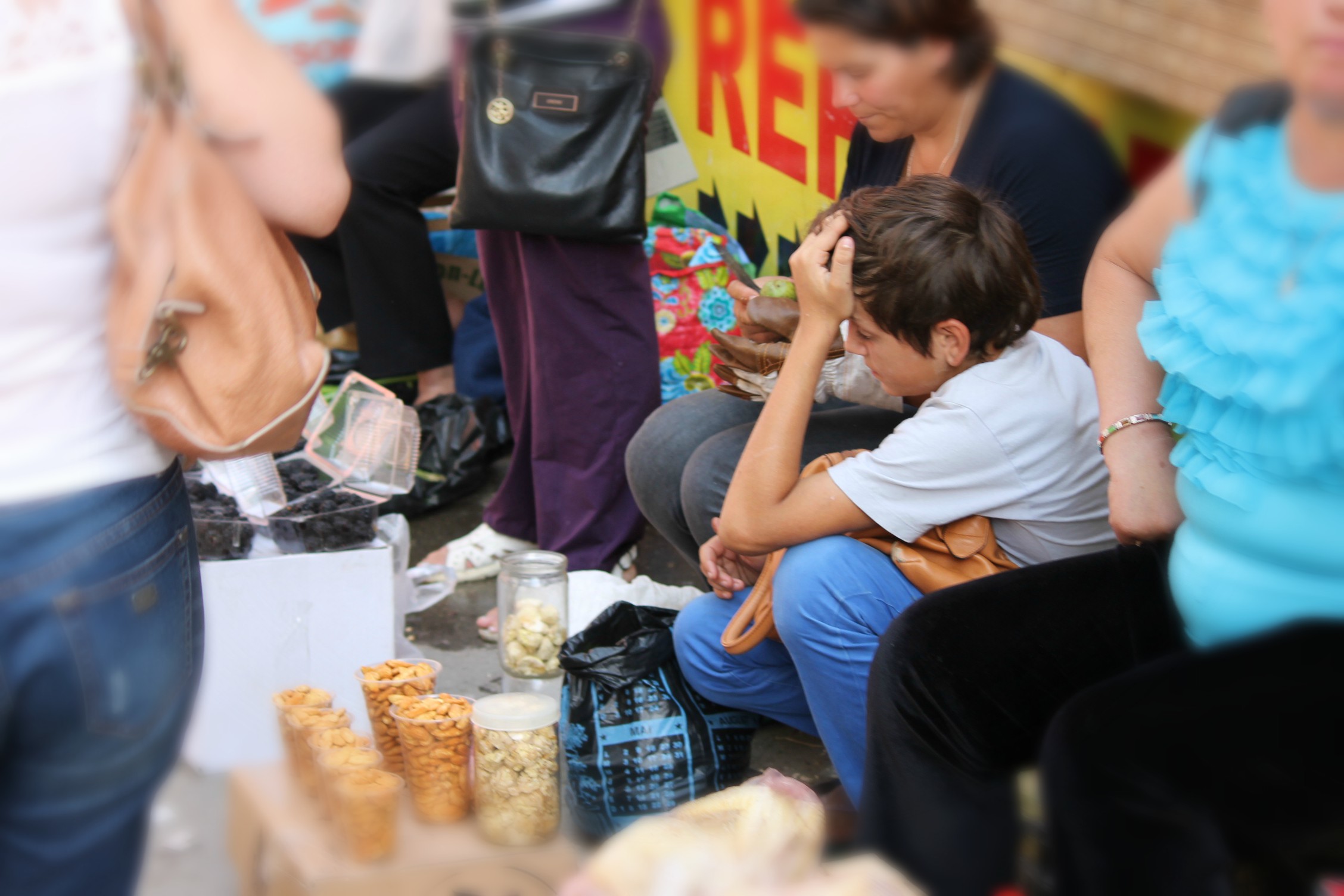 Dozens of children work alongside with adults in the agricultural markets in Chisinau. Some children help their parents to sell fruits and vegetables; others carry loads or clean stalls. Dorin, a boy aged 7, too short for his age, comes every day with his mom to Central Market because nobody can take care of the child at home. The woman tries to make money to buy school supplies for her child. Both of them go early in the morning to a storehouse where they buy corn, boil it and bring it up for sale. Their work day ends when the mother sells all the corn. They buy bread and vegetables from the market. Also, they save money to buy clothes and school supplies.

The market is the second home for Maria, a girl aged 5. Her granny takes care of her after her mother went to work abroad. The child comes to the market with her grandmother and helps to clean up after vendors leave the stalls.

Elena, 11 , is the only breadwinner of the family. Since she is on vacation, she makes bracelets which her mother sells at the market and buys food to feed the children.  Except Elena, there is one more child in the family - a boy aged 2 who was born with health problems. In fact, his allowance is the only salvation of the family, and some dozens of lei which mother collects from the sale of bracelets.

According to the Labor Inspection, the children who work all day in markets are subject to labor exploitation.

PHOTO GALLERY // Children who work at the stalls in the  Central Market stalls or help their parents to sell vegetables and fruits in order to buy clothes and school supplies. 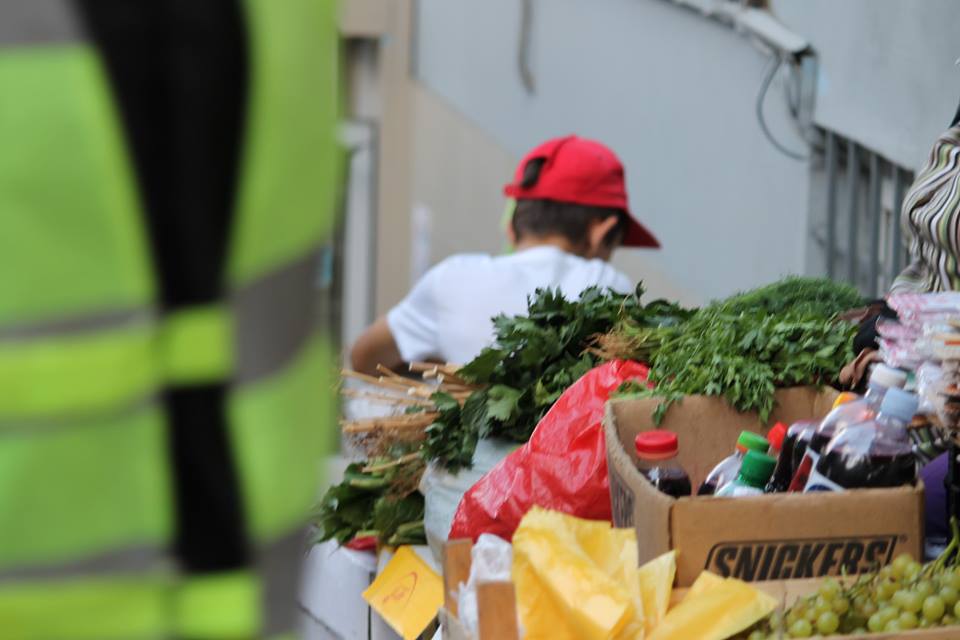 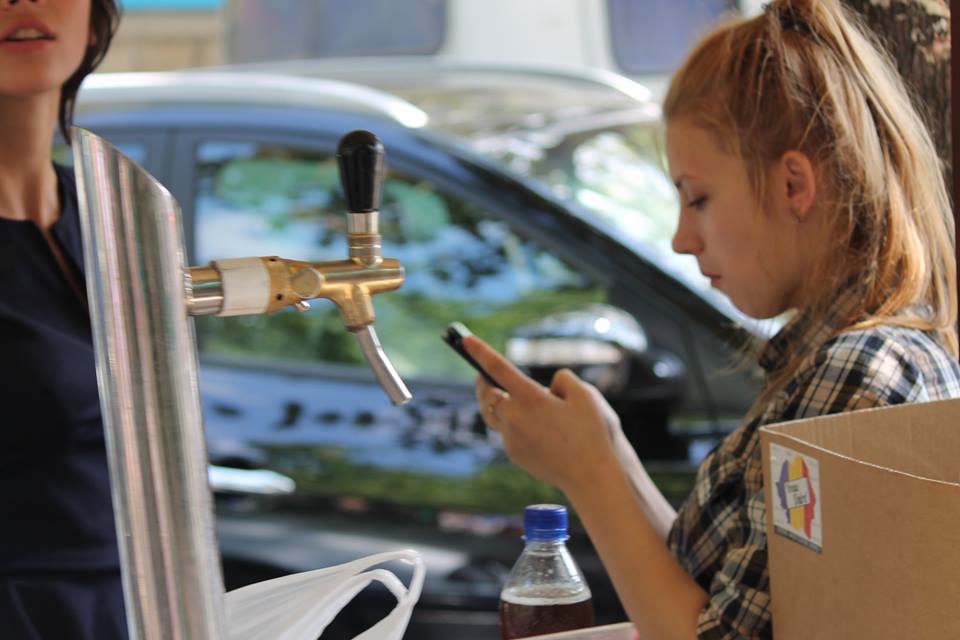 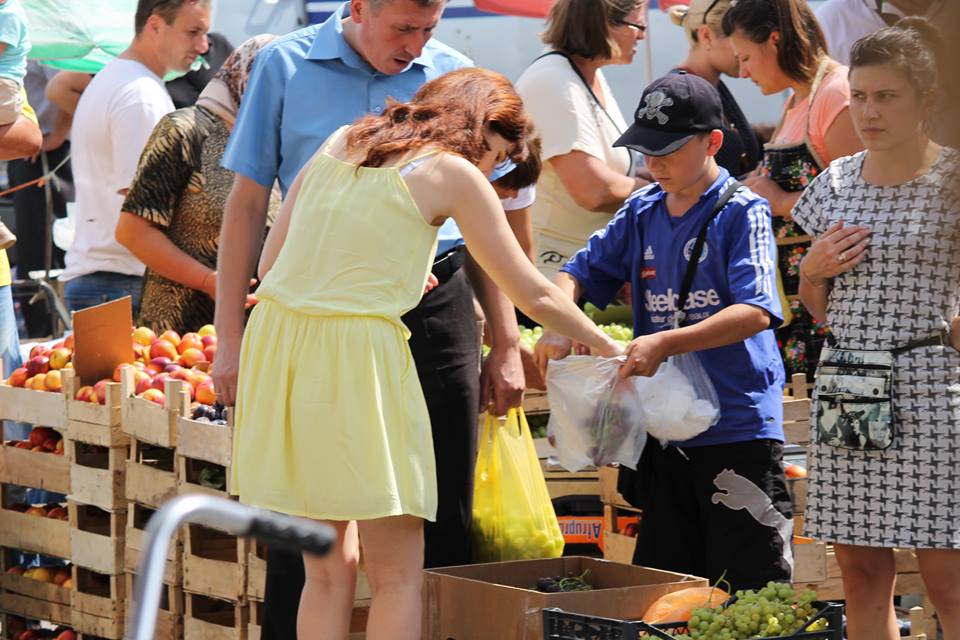 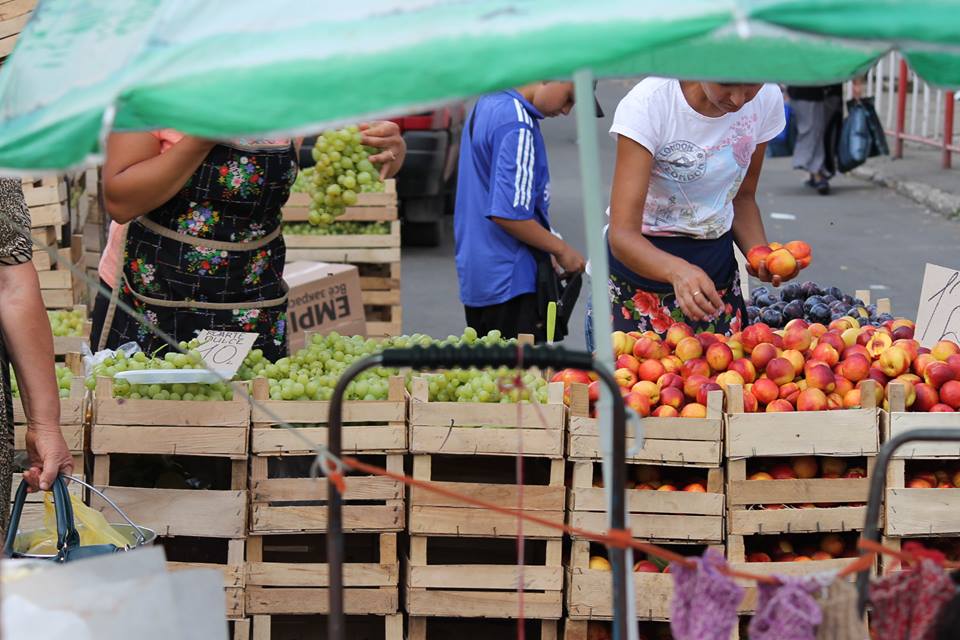 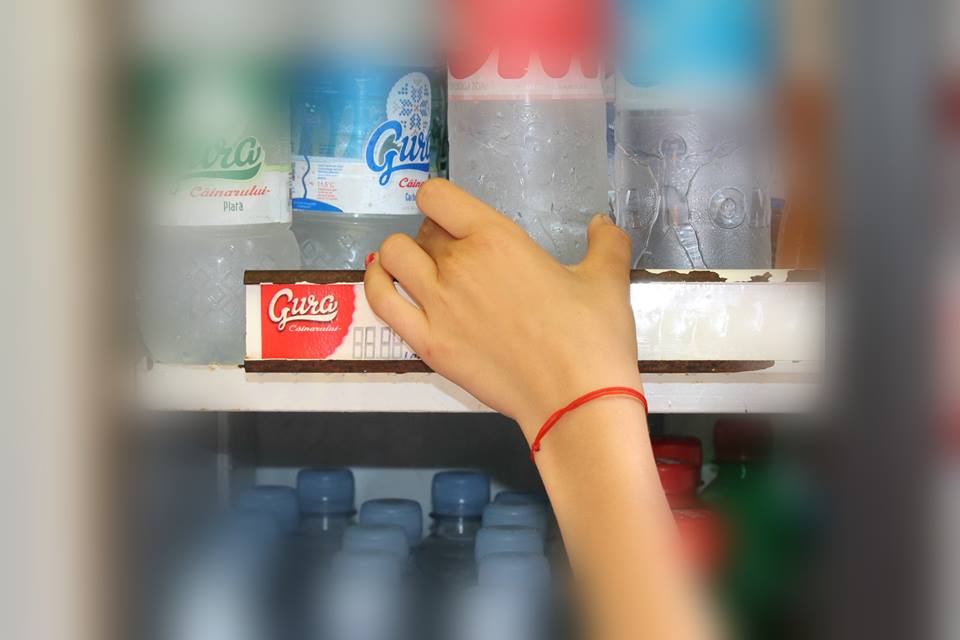 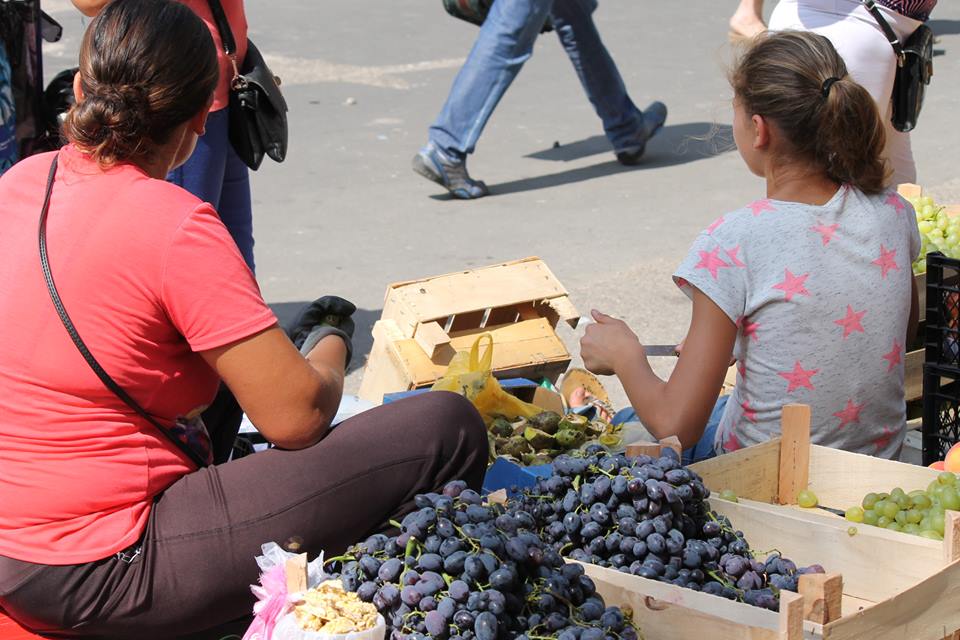 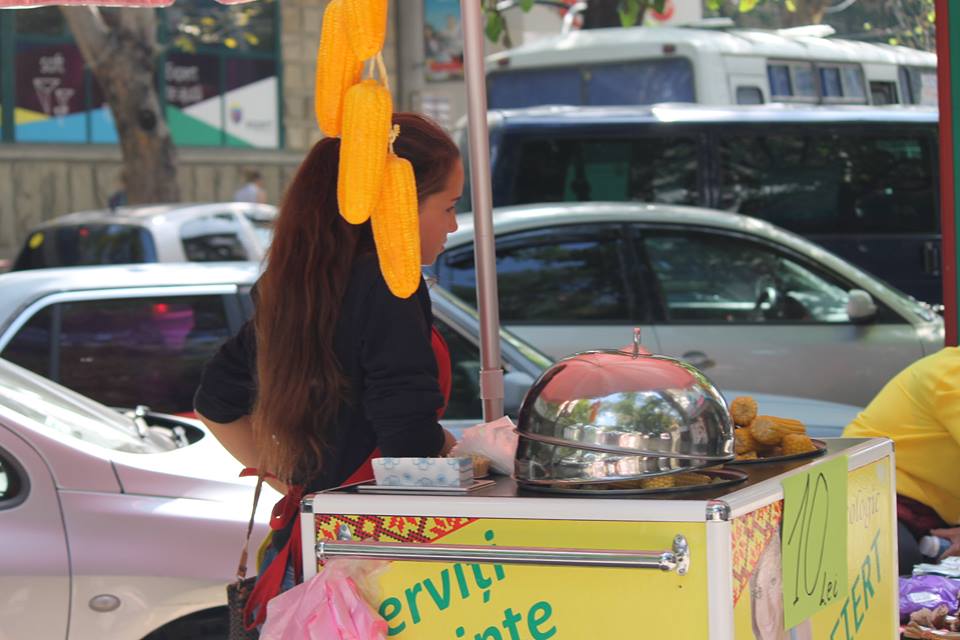 In recent years, a child was seriously injured at workplace, while two others died. One of the tragedies resulting in death happened while a teenager was committed to cutting the forest where he loaded wood, works prohibited by law for those who have not attained the age of majority. Another case happened in a fishing enterprise. A boy drowned in the lake in the possession of the person who hired him to catch fish. Criminal investigations were started on these cases.

„It is much easier to abuse of children under a moratorium” 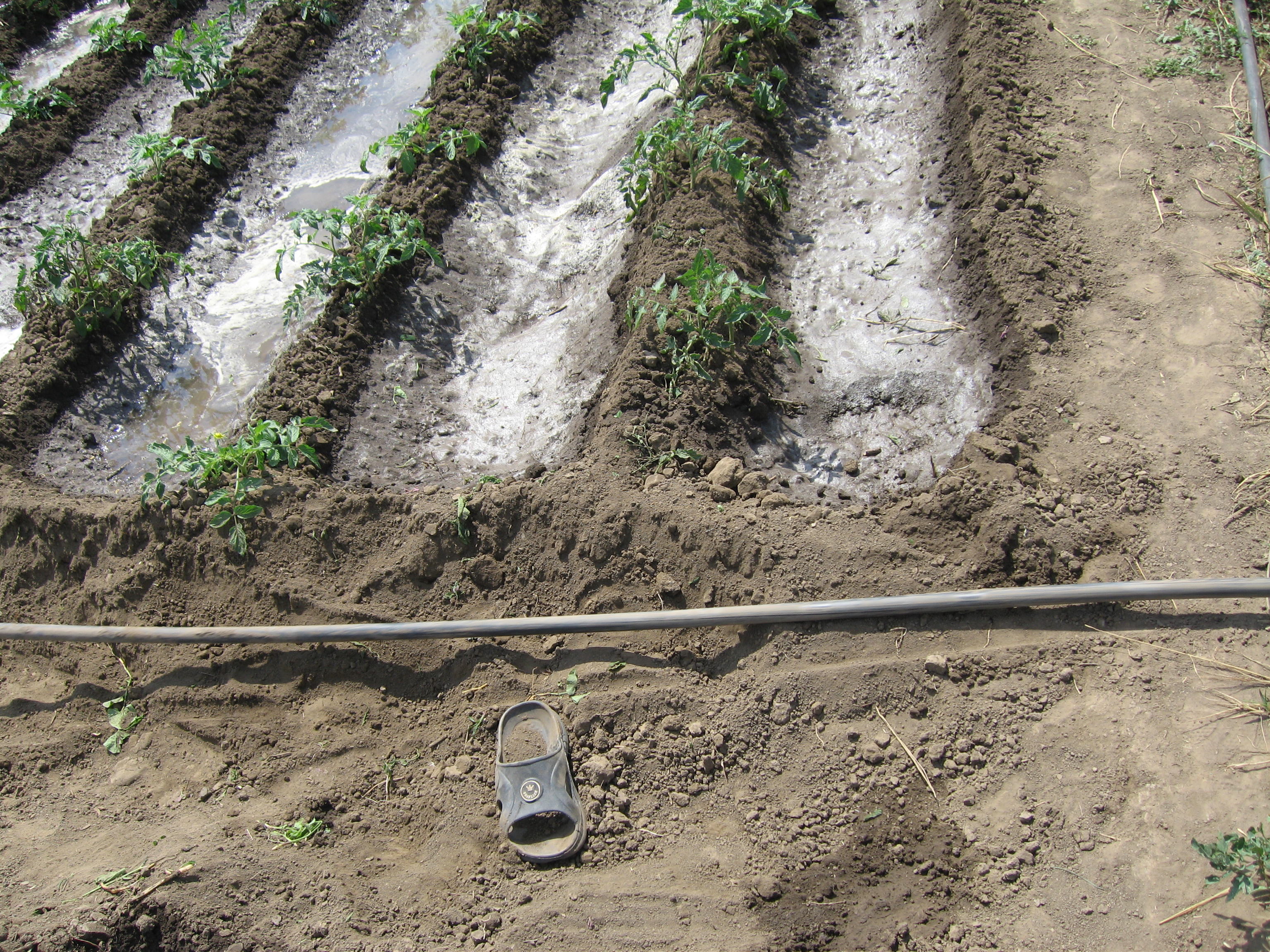 In turn, Cezar Gavriliuc, director of  CRIDOC, says that the phenomenon of children’s labor exploitation is broader against the way it is presented by the authorities.

"Children are cheap labor and easy to use and profit, especially that many rules are not respected in our society", said Cezar Gavriliuc. According to him, any political decision, including this moratorium, has a great influence on child rights’ observation. "As long as state structures do not control how the laws are respected, those who can abuse of children do it much easier, without any controls. That is why; when the Government proposes specific actions, they should be analyzed on how these decisions affect observation of children's rights. Certainly, they have not thought of this when they imposed the moratorium ", said director of CRIDOC.

So far, the Republic of Moldova has ratified two international conventions - one concerning the minimum age of employment, and the second - the worst forms of child labor. Maia Banarescu, the children’s ombudsperson says that in Moldova this phenomenon relates to mentality. "It is believed that if I worked when I was a child, why should not my child work !? Children are often involved in domestic work and these chores go beyond their capabilities. It is the role of the entire society, first of the Government, which is obliged to adopt policies to protect children and to avoid their labor exploitation ", says Banarescu.

Children’s ombudsperson says that the state should adopt special programs and social assistance to poor families so that children do not have to work, "even to go with mother to work, due to low living standards." According to her, the child labor exploitation is less examined and they perform just some studies. 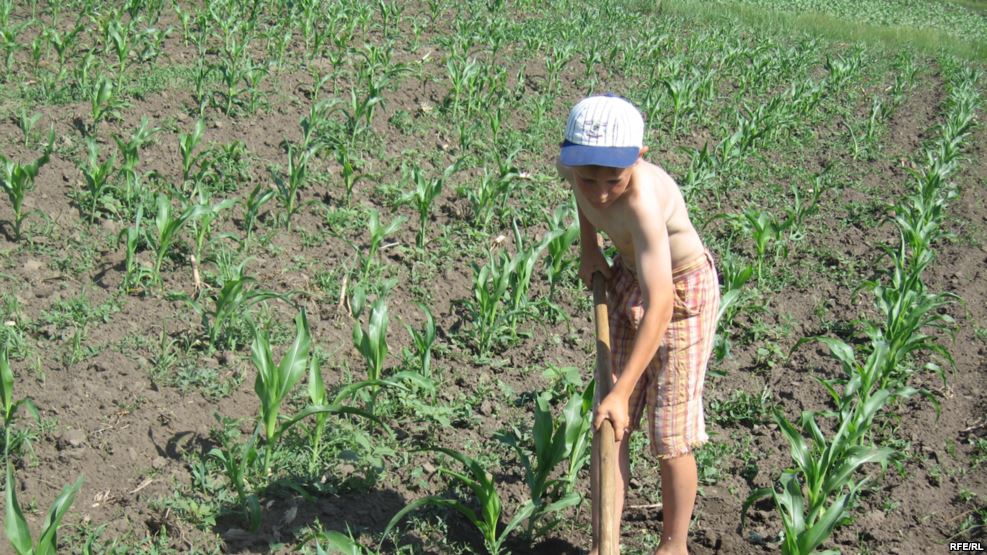 Meanwhile, the Ministry of Health warns that children's health is affected very much because of hard work. Mariana Tutunaru, Head of Department at the National Centre for Public Health, says that backbone mostly suffers that by the age of 18 is developing. "There may be kyphosis, scoliosis and lordosis. Similarly, on long-term, if a child is involved in inappropriate physical activities and morpho-physiological peculiarities, it has impact on the cardiovascular system", says  Tutunaru.

VIDEO// Mariana Tutunaru, head of division at the National Center for Public Health, about the impact of hard work over the children’s health

Statistics either up or down

Official data on child labor exploitation vary every year. In 2014, authorities discovered 142 child laborers and in 17 cases the patrons admitted violations at employing children. Also, 4 children were employed in jobs which are prohibited by law. In 2015, of the 40 children who worked, 30 children performed undeclared work. In 8 cases, inspectors have issued prescriptions to remove persons under 18 from work process. In the first 6 months of this year, inspectors have identified 11 children who had been working without a contract.

According to the Labor Inspection, most children are trained to work in light industry, trade, construction and agriculture, and most cases have been detected in the north of the country.